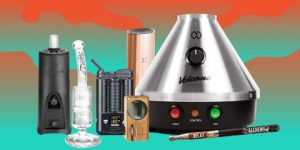 People in almost all parts of the world have for centuries been smoking cannabis in order to reap its health benefits. In recent years, however, it’s been established that smoking triggers the release of harsh toxins that cause damage to one’s lungs, and cancer as well. Combine this with the fact that smoking tends to be stinky and messy, and it’s easy to see why vaporizing/vaping has lately been growing in popularity as a safer, healthier alternative.

Basically, a vaporizer is any device that heats cannabis until its active ingredients are released in the form of a gas. Vaping differs from smoking in the sense that this process takes place while sidestepping combustion and, as a result, the production of smoke. This makes it quicker, healthier and more efficient than smoking. Because the devices come in so many shapes and forms, you will want to put your personal preferences along with a few other factors into consideration when shopping for the best 2018 marijuana vaporizer.

Where Do you Vape?

If most of your vape sessions tend to take place in the confines of your home, a desktop vaporizer would be the best choice. Virtually all models plug into wall outlets, but the devices can be further subdivided into other categories, including:

-Whip vaporizers: These rely on a special mechanism to draw vapor from the device, usually in the form of a device that consists of silicone/glass/vinyl tubing, and which plugs to the mouthpiece.

-Bag vaporizers: This is commonly preferred for group vaping. Also known as balloon vaporizers, the devices comprise a bag/balloon that inflates as it’s filled with vapor, thus allowing users to inhale directly from here.

-Dual vaporizers: These offer the flexibility to fill a bag/balloon or use a whip.

If you want the flexibility of being able to vape while on the go, what you should be looking for is a portable device. These devices are lighter and smaller than their tabletop counterparts, which allows them to be transported much more easily. Additionally, they don’t need to be plugged into a wall socket when in use and, as a result, they’re perfect for individuals who need to vape discreetly.

When shopping, you’ll come across handheld vaporizers of several types, such as:

-Butane vaporizers: Like the name suggests, these are heated with butane (the same fuel used in cigarette lighters), which means they have to be refilled from time to time.

-Battery-powered: Most of these models are powered by rechargeable batteries, while others rely on disposables. Overall, battery-powered devices are by far the best in terms of convenience and efficiency.

-Flame vaporizers: These are heated using a standard cigarette lighter, a simple mode of operation that makes them significantly cheaper (and less efficient) than other portable devices.

What Will You Be Vaping?

The kind of device you will purchase will also depend on what you will be packing it with. Vaporizers made for concentrates tend to be smaller than those made for loose bud or oil/wax. It goes without saying that using your device for anything besides what it was originally prescribed for will give you a hard time in more ways than one.

The manner in which the herb is heated makes a huge difference in the overall vaping experience. Convection vapes do this using hot air, while their conduction counterparts come with a small metal chamber for this purpose. Ideally, what you should be aiming for here is to get a device that evenly heats the herb without you having to stir it constantly. And while this is a description that aptly suits convection devices, you can still find plenty of conduction models with the ability to do the job.

It’s worth mentioning that vaporizing has been around for quite some time, but it’s only within the last few years that it has become popular in the mainstream world. And while it’s true that this method requires an upfront investment which isn’t the case with smoking, the fact that it offers a practical way to consume marijuana without the drawbacks of the latter makes it worthwhile. With so many devices available in the market, your choice will all come down to your individual preferences. Just keep them in mind when shopping and you’ll be able to find the perfect device for your needs.